The Thermophilic Microbes of Yellowstone 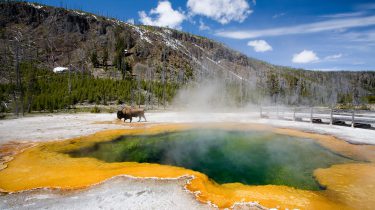 It is believed that John Colter, former member of the Lewis and Clark expedition, was one of the first European explorers to set foot in the area we now know as Yellowstone. One can only imagine the surprise Colter or other early explorers felt upon entering this strange landscape for the first time. After arriving home, these explorers would eagerly tell friends and family stories of “boiling rivers,” “spouting waterfalls,” and  “noxious steam,” stories which, unfortunately, were often met with disbelief before Yellowstone became the well known national park it is today.

This disbelief is understandable. Yellowstone is a very unique landscape, one that most people living in the early 19th century were entirely unfamiliar with. It is a land of erupting geysers and colorful hot springs, all concentrated within a relatively compact area.

The secret behind Yellowstone’s unique environmental features is geothermal heat. The national park is located over a hotspot— a geological event in which a plume of hot magma from deep within the Earth’s mantle rises upward. Yellowstone’s unusual proximity to geothermal heat leads to some of its most notable features such as hot springs, geysers, and colorful thermophilic bacteria.

While some may marvel at the geysers, what intrigued me most on my trip to Yellowstone this past summer was the bubbling hot springs. Walking along the boardwalk, the area was plastered with signs warning tourists not to step off the path. This was because innocent patches of soil could easily crumble and give way to pockets of boiling water underneath. Even a number of the hot springs themselves did not look too dangerous, ones that did not bubble or give off steam, until a temperature gun revealed boiling temperatures. The harmless look of these hot springs and the land surrounding them have led to a number of tragic incidents in Yellowstone’s past in which tourists underestimate the danger and get burned.

Thermophiles – A Rainbow of Diversity

Thermophiles are organisms that thrive in high temperature environments. In biology, life is divided up into three main branches, known as domains: the archaea, bacteria, and eukarya. Most thermophiles fall into the category of bacteria and archaea, though some thermophilic eukaryotes exist as well. This means that thermophiles exist in all three branches of life, all of which can be found in Yellowstone.

Within Yellowstone there is a large variety of thermophiles, best showcased by the colorful microbial matting surrounding the hot springs. The striking colors of these rings actually indicate different thermophilic species that have evolved different preferences for temperature. For hot springs, this difference in temperature depends on how far the microbe is from the center of the hot spring. Different species of thermophiles utilize different pigments to absorb and protect against the sun’s rays, resulting in a range of color. Species which prefer the hotter temperatures of the interior are typically green and blue while species which prefer the cooler temperatures of the exterior are more yellow and orange in color. This leads to the brilliant rainbow effect of Yellowstone’s hot springs that so many love.

Thermophiles – A Basis for Life

Another interesting aspect of hot springs is that it is not only extremophilic microbes inhabiting their biomes. A number of comparatively “average” organisms inhabit the hot springs as well. In an environment that could easily kill me if I stepped off the safety of the boardwalk, I remember the surprise I felt upon seeing birds hop along the edges of the toxic hot springs. Yellowstone’s hot springs not only host thermophiles, but a number of insects, birds, plants, and even buffalo.

But even with so many forms of life present, this biome like so many others relies on the bottom of the food web. In this case, thermophiles sit at the bottom of Yellowstone’s food web. Their source of carbon comes from an inorganic source, not from consuming other organisms. Yellowstone’s thermophiles are often photosynthetic as well, meaning their source of energy comes from the sun. These microorganisms which utilize inorganic sources of carbon and energy act as an important foundation for life in one of its toughest environments.

Thermophiles are not only interesting to learn about, but have a number of practical  applications as well. One of the most well-known applications of thermophilic research from Yellowstone was in the development of Polymerase Chain Reaction (PCR), a DNA replication technique. This technique uses an enzyme extracted from the thermophile to rapidly multiply a sequence of DNA. PCR is a technique used in a wide variety of labs from forensic science to medical research. The rapid replication technique of PCR has made a number of important scientific discoveries both easier and faster to discover.

Researching thermophiles is also fundamental to some of science’s biggest questions like the origin of life and the existence of life outside of Earth. It is hypothesized that life may have originated in the ocean’s hydrothermal vents since they provide a source of energy and carbon. Like hydrothermal vents, the hot springs of Yellowstone also contain a source of geothermal heat energy and inorganic carbon. In understanding how life formed on Earth, we can understand how life can form on other planets. For this reason, thermophilic research in Yellowstone is funded by NASA since its high geothermal activity can mimic environments from early Earth and other planets (for instance, Mars had geothermal springs in the distant past). Thermophilic bacteria and archaea are some of the oldest types of life forms on this planet and there is clearly much to learn from their wisdom.

Angela Murphy was a participant in the 2021 Young Scientist Program.