Space Settlement with the Help of Plants 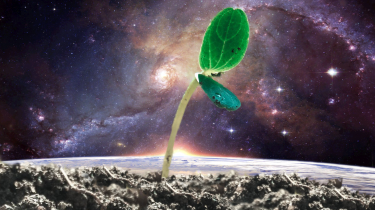 Nature is not only an aesthetically simple source of inspiration, but also an enormous research and development laboratory that has tested the most appropriate shapes, strategies, materials, and dynamics in the field to overcome complex and challenging problems for more than 3.8 billion years. The strategies that nature has developed to overcome its own problems can be a solution to almost everything in our world today. Leonardo Da Vinci inspired aircraft today by studying birds during the renaissance. George de Mestral, a Swiss scientist, examined under a microscope the clod stuck to his dog’s fur, later leading to the technology that we call Velcro (which has myraid uses, even being used in the clothes of astronauts).

Many more examples are inspired by nature. The Skorsky company drew inspiration from the dragonfly bug when designing the H5 Droganfly. They analyzed the dragonfly’s flight by examining it. As a result of these investigations, they developed the helicopters. The vibrations emitted by bats (who actually have rather poor eyesight) hits obstacles and returns, providing them with a picture of their environment – a process known as echolocation. The operation of our radar technology is based on the same system. The reason migratory birds fly in a V-shape is because it saves energy. This flight pattern of migratory birds inspired the designs of show aircraft. The fact that the hind legs of rabbits are wide, long, and flat increases their ability to move in the snow. Snowshoes using the same system are designed in this way. The famous Eiffel Tower was inspired by the thighbone of person.

These examples were all designed with inspiration from nature. This branch of science, called biomimicry, is an alternative approach to imitating nature and solving many people’s problems for inspiration.

For humans who wish to travel into space and settle on other worlds, relying on the outcomes of such optimization from within the natural world will be crucial. For instance, settling on a new planet, adapting to different climates, and sustaining human life may be improved with a little help in design from abilities of plants to shed pollen, seeds, and spores.

Let’s examine how nearby plant species can inspire us to settle in other worlds with ballistics before we go to distant planets:

Sphagnum, also known as peat moss, is mostly seen in the Northern Hemisphere in forests and moist tundra areas. This plant can store water and can hold 16-26 times its weight in water. It has a unique cell structure and a thin texture. There is no vascular system to move water and nutrients. Peat moss distributes spores from their capsule through the wind, just like an air gun mechanism, with a sharp sound that can be heard from a distance of several meters.

Peat mosses are often up to 4-5 cm in height. Because of their short stature, they have had to develop new systems for spreading their seeds. They are found over 1% of the world. The capsules where they collect their spores are in the shape of a rugby ball, the top of which is covered with a lid. Despite this, the water in the epidermal cells exposed to the heat of sunlight evaporates and is thrown out through the drying chimneys called Pseudostoma until the ball takes a cylindrical form. The resulting contraction causes an increase in tension in the walls; such that this increase is like the cap of the capsule found in Kinder surprise eggs, the cap of the cylinder bursts the operculum and throws the spores upward at a speed of about 80 km per hour. Immediately after the explosion, the kinetic energy becomes maximized and a vortex is created. This combination allows a vertical throw of 20 cm in some cases.

There are those who compare this mechanism to an air rifle, but it is a much more complex system, because the atomic bomb-like mushroom cloud formed by the vortexes during the explosion phase greatly increases the effective firing potential. Moreover, this energy is not generated from the compressed gases in the capsule, but is rather caused by stretching of the walls that dry with the heat of the Sun. Thus, cylinder deformation occurs by increasing the pressure inside the capsule.

Cornus canadensis grows in the vast spruce-fir forests of the North American taiga. The cornus canadensis flower opens in less than 0.5ms, as shown in the picture below.

Bunchberry stamens are designed like miniature medieval trebuchets – special catapults that maximize the throw distance by connecting the load (pollen in the anther) to the ejection lever (filament) with a hinge or flexible strap (thin vein string attached to the filament end of the anther). This flower catapult allows the stamens to push pollen upward faster than a simple catapult. After the leaves are opened, the twisted filaments unfold and release the elastic energy. only when it begins to accelerate horizontally. Rapid opening of the spontaneously incompatible bunchberry can increase cross-pollination in two ways. First, when insects trigger flowering, the released pollen attaches to body hair until it is transferred to a sticky stigma. The force required to bloom (0.1-0.5 mN) supports large pollinators (eg bumblebees) moving rapidly between the inflorescences; It effectively excludes smaller, less mobile visitors such as ants. it is carried by wind currents. Inside, pollen is transported more than 22 cm (more than 100 times the flower), and in the presence of a steady wind in the open air, pollen can move further than a meter. Popping flowers increase the pollination of insects and allow wind pollination, contributing to the growing evidence that flowers often use multiple pollination mechanisms.

A hummingbird sips the nectar of this flower while in the air, without coming into contact with the flower. Therefore, pollination will never occur unless this plant throws pollen against the bird. The principle this plant uses is just like a mouse trap. The stylus, which supports the anthers, is kept fixed by the lower two petals, which are curved downwards and have a trapezoid shape. The pressure exerted on the walls of the flower by the bird’s tongue or its long beak allows the hull to open and the anthers to be released, and as the hard epithelial cells of the neck are inclined, the anthers in question are ejected, along with them, a cloud of pollen is thrown towards the bird’s location, thus covering the entire body of the bird with dust. The stigma, the pinnacle on the neck of the female organ where the pollen grabs and germinates, remains there longer, so the bird has to touch it as it draws nectar and closes the flower’s love circle.

All launch systems are different from each other. At the core of all these systems is a common mechanism for adjusting the cells’ turgor ratio (the amount of water in the cells); the water ratio in the cells of the fruit at certain points sometimes increases and sometimes decreases, these points are almost always a capsule, a silicola, or a legumen. The dried fruit cracks open and releases its ripe seeds. When the tissue of the fruit dries, the tissue in question hardens and is ready to burst at certain stress points, which are caused by the mechanism of alternating different tissues and the fragility of the pre-programmed welding spots. The mentioned stress points are located between the ovary of the flower and the carpel leaves that form the fruit that is cracked and opened later. The hardness of the outer walls dried by dehydration and the pressure of the water accumulated in the innermost tissues create the balance in this system, creating the glue-based soft areas that can be folded and lignified hard areas where the bi-vertical directional fibers increase the flexibility.

At this stage, when the degree of strain reaches an ideal point of no return, the mechanism steps in and activates the catapult or whip, and the potential static energy accumulated so far is transformed into kinetic energy and transferred to the seeds. These seeds in question are light enough, smooth (low air resistance), round or elliptical in shape (as observed in the Illicium species), and have a weight and shape suitable for ballistics science. In this famous type used in anise flavored liqueurs, the strong but also flexible U-shaped lignified cells surrounding the seed strengthen the effect of the spring-like ejection mechanism as the fruit slowly dries, and thus the potential energy accumulated so far is released during the shot.

At first consideration, the notion of borrowing ideas from plant seeds to provide inspiration for the design of artifacts that are designed to function away from the Earth might seem a strange one. However, space exploration places unique requirements upon engineering which actually increase the desirability of capturing the characteristics of biological organisms in general, and of plant seeds in particular. Space exploration poses many challenges, from extreme temperatures and radiation, differences in gravitational regimes, and communication limitations, to the complexity of systems engineering, and the requirements for reliability, robustness, and autonomy. Facing such complexities with current engineering practices and solutions can be very expensive, and there is a strong need to find simpler approaches. Nature can assist in this process and provide many examples of engineering solutions. Understanding in detail how plants control seed dispersal can provide some advantages in improving space exploration. Plants have already figured out what will spread on Earth, and they showcase many examples of robust design and specific functionality worth researching. It should not be forgotten that, although the twentieth century had a reputation of being the age of physics, the twenty first century is the age of biology.

Ayşe Meriç Yazıcı is a PhD student at Istanbul Aydin University, Department of Business, and she is also a Visiting Scholar with the Blue Marble Space Institute of Science.