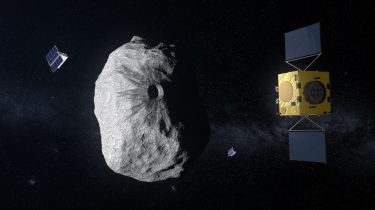 Concerns about how to protect our planet from asteroid impacts have long plagued planetary scientists. While statistically speaking the chances of a disastrous one hitting our planet in our lifetime is very slim, the consequences of being underprepared could be significant. Quite infamously, it did not bode well for the dinosaurs the last time a large asteroid found its way to Earth. While confidence has been high that humans will be able to provide a solution if such a conundrum would occur, methods on how to divert an asteroid have never been tested. This soon will change with the mission DART.

DART, which stands for Double Asteroid Redirection Test, is a first of its kind. It will attempt to use kinetic energy to impact an asteroid, changing its speed and direction. DART’s target is a binary asteroid system named Didymos, meaning “twin” in Greek. This system is an ideal testing ground for the first attempt at planetary defense as it poses no threat to Earth. The system consists of a  larger asteroid, named Didymos, and has a smaller asteroid orbiting it, named Dimorphos. If all goes to plan, DART will intercept with Dimorphos and knock it into a different orbital path. While it will not significantly alter the path of the orbit, it will be the first attempt to demonstrate our intervention capabilities should a larger asteroid ever head our way.

Joan Melendez Misner, an Aerospace Integrations Engineer at NASA and an incredible science communicator, is no stranger to what DART is attempting to do. She has spent a great amount of time working on DART and has first hand knowledge about this exciting mission, set to launch at the end of this month. She has been enthusiastically sharing her work on popular platforms such as Instagram and TikTok for months, encouraging people of all ages to get interested in space science. I reached out to Joan to get her perspective and capture the excitement of a crew member on this mission. She currently is in California with her fellow DART team members, anxiously awaiting the launch day. She graciously answered a few questions for me in between her action packed days of team building exercises and press conferences. I was intrigued to know what it felt like to work on a project that is laying the groundwork for potentially saving the planet one day.

Says Joan, “It is so surreal to think that my first mission assigned at NASA has to deal with the first ever Planetary Defense mission. It’s absolutely wild to think about. In all seriousness, I am beyond honored to be able to say that I had a hand in testing the technology that one day may save Earth. The Applied Physics Lab (APL), coined the phrase “Planetary Defender” and I’ve been using it ever since.”

When not working on unmanned missions for NASA, Joan also is a fierce advocate for girls in STEM. She recently participated in a calendar project called, “Princesses with Powertools” taking on the role of Princess Jasmine. She also spends time following popular trends to creatively and humorously create inspiring content to encourage others to put aside feelings of imposter syndrome and to follow their dreams. Thinking about how hard she worked to get where she is today, I also was interested in learning what it would feel like to see a project she had worked so hard on get projected on a rocket into space, never to return to Earth.

Joan excitedly remarks, “It’s going to feel FANTASTIC! We are busy leading up to launch day getting the Spacecraft (DART) integrated onto the Falcon 9 Rocket, and the day of launch we will be in mission control ensuring the spacecraft separates cleanly and safely from the rocket.” She continues,  “We typically don’t celebrate until the Spacecraft has separated from the Rocket and it’s headed on its way to wherever the mission is, in this case the double asteroid system Didymos. Once it separates, we can all breathe a sigh of relief knowing we have completed the first leg of the mission. And man oh man, will I be cheering and jumping up and down at that moment!”

DART is scheduled to reach the Didymos system sometime between September 26th and October 1st, 2022. When it arrives, the real work will begin and will broaden our understanding of the best method of future intervention of asteroids. When thinking about the mission, it was difficult for me not to pull on pop culture and think about the DART test in comparison to the blockbuster movie “Armageddon”. Being the good, professional science communicator that I am, I couldn’t help but ask Joan how often the team references the movie, and more importantly, sings the Aerosmith theme song “I Don’t Wanna Miss a Thing.”

Joan chuckles, “It is the unofficial mission song. We have all inserted it into conversation internally, and it may or may not be playing in the background at all times.”

Ad Astera to Joan and the entire DART team from myself and all of us at Blue Marble Space Institute of Science. We will be cheering you on on launch day and when your hard work finally arrives at Didymos next year!