“When I think of the Earth, I think about…” 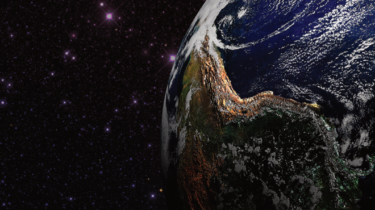 When I think of the Earth, I think about how it is a home for so much life — plants, microbes, fungi, animals, and humans. Technological advances discovered by humans have given us the potential to discover more about our world and uncover its past. While humans are capable of so much positive change, we have the ability to cause so much damage as well. The effects of climate change are permeating into ecosystems, the atmosphere, and the environment at large. As the Earth has given humans a place to live, we must return the favor and restore the life it has provided us.

Billions of years ago, the Earth mustered a complex formula to sustain life. With sufficient amounts of energy and liquid water, the right temperatures, and the necessary chemical elements, all life on Earth has been able to diversify and grow. Energy from the Sun has provided a steady input of light to Earth’s exact orbital location around the Sun, allowing for the presence of liquid water on Earth’s surface. Liquid water, the stuff of oceans and raindrops, has served not only as a home for living things, but has provided the fluid environment for chemical reactions within our cells. As far as we know, our planet is the only planet to have life, endorsing the uniqueness of life. Because we have yet to discover other forms of life in the universe, life as we know on Earth, should be treasured and nurtured.

With this understanding, I can’t help but reflect on the damage we humans are causing not only to the Earth but to other living things. Humans have caused massive amounts of carbon in the atmosphere damaging the atmosphere and warming the planet. Demand for climate change discussion and action has grown, but I believe the conversation can reach an even greater extent. This discussion and our action should not be held in one section of Earth; rather, the change needs to be augmented to all areas of the world. As the largest cause of climate change, we must unite and actively try to reverse the damage we have caused.

While humanity is so diverse and rich in cultures, languages, beliefs, and perspectives, we all share one thing: Earth. This planet has upheld all life as we know it for billions of years, and it would be shameful to believe that our individual time on Earth is the only time that matters. Even if we destroy ourselves, the other life on Earth will likely continue to exist. We must practice sustainable methods so that future generations can continue to live on, and so that we can honor the rich history of life on this planet.

Elisabeth Lee is an undergraduate student studying human biology at Cornell University. On campus, she works on the E-board of Cornell Undergraduate Research Board and is a dancer in the Impact Dance Troupe. Fueled by hands-on experiences, she aspires to work in the healthcare field and serve those in her community, while maintaining her life-long passion for ballet.